The Pendleton Project: Making Health Care Accessible to All

The small town of Pendleton, located in the foothills of Eastern Oregon, might seem like an unlikely place to discover an example of how best to ensure disability rights for a community. But that’s precisely what you would find after the local community came together with disability advocates from across the region to tackle the barriers to health care faced by people with disabilities.

This inclusive process was exactly what the Oregon Office on Disability and Health (OODH) had in mind when it initiated a new Community Engagement Initiative (CEI) called the Pendleton Project that sought to increase access to health care for people with disabilities.

The Center for Disease Control describes the CEI process as “local groups and individuals collaboratively working together on the common issues that affect their well-being.”  The aim of the CEI process is to bring together individuals with all types of disabilities, representatives of local government, health care providers, and disability organizations/advocates to identify and solve problems.

"The intent of the Pendleton CEI was to initiate a transformational process that identified specific accessibility problems and strategies to address them," said Angela Weaver, a project coordinator at the OODH. This process led to "supporting development of an empowered and informed voice of the disability advocacy community."

The NW ADA center is one of 10 regional ADA centers, all of which work with local organizations to provide information, guidance and training in order to support the ADA's mission to "make it possible for everyone with a disability to live a life of freedom and equality."

In 1997, the OODH commissioned the Community Living Workgroup to better understand and improve accessibility for people with disabilities throughout communities of Oregon.  The vision at the time was to foster a collaborative effort that empowers community members to address their needs through dialogue and mobilization. Workgroup participants included people with disabilities, disability service providers, representatives from the Oregon Disabilities Commission, and researchers from Oregon Health & Science University (OHSU), where the OODH is housed.

The Workgroup examined the different factors surrounding the accessibility of health care in the community, and then developed a series of steps through which the CEI process could be most effective.  After the Workgroup developed the foundations for how to implement CEI successfully, Weaver and other colleagues at the OODH continued implementing CEI on a host of different topics over the last 10 years as a central focus of their group.

The Pendleton Project began in late 2013 when Weaver teamed up with John Dineen, a Training and Information Specialist with the Northwest ADA Center, to implement a CEI specific to health care-access in Pendleton.  The NW ADA center is one of 10 regional ADA centers, all of which work with local organizations to provide information, guidance and training in order to support the ADA's mission to "make it possible for everyone with a disability to live a life of freedom and equality."

Weaver and Dineen were joined by a third local partner, Darrin Umbarger, a long-time disability advocate. Umbarger, who is the chief executive officer of Clearview Mediation and Disability Resource Center, was familiar with the kinds of barriers people with disabilities encounter in Eastern Oregon.  Umbarger had been diagnosed with multiple sclerosis when he was 23 years old. His years of experience advocating for himself helped him develop strong working relationships with individuals throughout the city of Pendleton.  As a wheelchair user he also had firsthand knowledge of the various physical barriers to health care that people experienced, from poor infrastructure like inaccessible sidewalks, to inadequate parking spots at clinics for accessible vans, or inaccessible medical equipment such as examination tables.

The three advocates followed the 3 primary steps of a CEI to implement the Pendleton Project:

The first step was to identify and prioritize common barriers to health care in the community by bringing together people with disabilities, family members, and advocates in a Town Hall-type meeting. 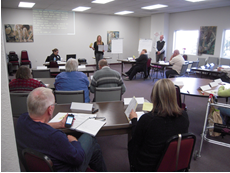 The Workgroup promoted this meeting to the disability community through printed flyers, email announcements, a newspaper story, radio and print advertisements. They also presented to local Community Care Organizations (CCOs) by teleconference.

Approximately 25 people attended the Town Hall discussion in October 2013, which included individuals with cognitive, mental, and physical impairments as well as parents and service providers.

Dineen and Weaver co-facilitated the 3 hour-long discussion where participants were able to speak about barriers to health care accessibility, suggest solutions, and prioritize the issues for follow-up.

People voiced their frustration with numerous transportation barriers such as lack of bus service to the main street where most clinics were; concerns about transportation drivers not following safety procedures; and drivers’ unwillingness to offer additional assistance to riders with extra needs, like helping them in and out of the taxi with their suitcases.

Common barriers to health care facility access included issues like small and inaccessible exam rooms, tables that were too high or narrow to transfer onto, inadequate signage at hospitals and clinics, heavy doors and narrow doorways with buildings sometimes lacking ramps, and improperly marked accessible parking spaces or no spots for vans.

Finally, participants spoke out about problems with health care provider attitudes, communication style and disability knowledge. Many people voiced the need for improvement in general disability etiquette awareness, the legal obligation to provide "Effective Communication," such as American Sign Language interpreters or alternative auxiliary aids and services, and the need to help individuals navigate through the health care system.

There were also examples of solutions that worked well for people. “When I go to my doctor's office," one person said, "he has a little buzzer on the outside and I push it and they come and open the door for me.”

In order to mobilize the community into action after the meetings, volunteers from the Town Hall joined three teams that would work with providers and officials on each of these three categories:

Umbarger was there every step of the way, helping the teams follow through with their objectives while members of Clearview Mediation provided support like offering meeting spaces for the teams to meet.

Dineen and his colleagues at the NW ADA Center continued to provide the technical assistance that their organization specialized in. They identified "best practice" strategies, clarified legal obligations under the ADA, produced informative "Fact Sheets" that summarized the key issues related to accessible health care, accessible diagnostic equipment, and accessible medical examination, and researched questions related to building accessibility standards. 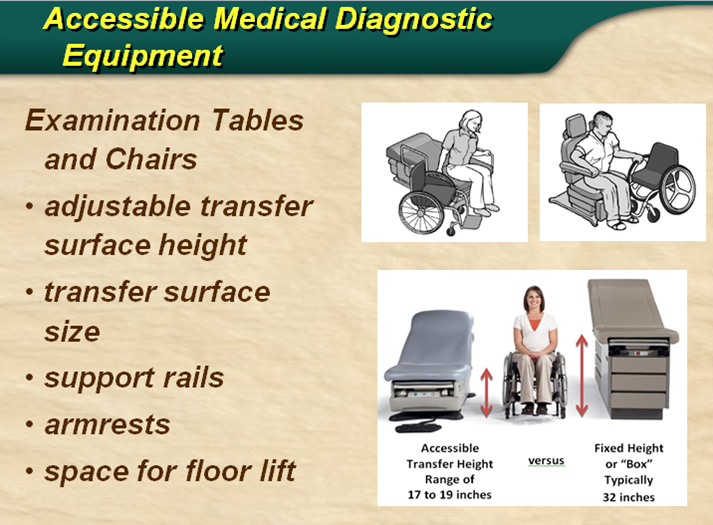 Umbarger and the Clearview staff kept the momentum going by providing follow up support for several months after the Town Hall and Infrastructure meetings.  The team provided in-person Disability Awareness and Etiquette Trainings to providers and other medical staff in the community to address the attitudinal barriers that had been highlighted.

Dineen and colleagues at the NW ADA Center also developed an online course called Respectful Interactions: Disability Language and Etiquette, which was designed to help organizations and individuals become familiar with disability topics so that they would be comfortable using appropriate language and be better able to communicate with people with disabilities in an effective manner. An example of similar Disability Etiquette guidelines is available online from the Research and Training Center on Independent Living of the University of Kansas, which was developed through their own local involvement in the CEI process: Notes on Disability Etiquette.

Months of dedicated work led to lasting results for Pendleton's residents with disabilities. For example, health care facilities that were equipped with inaccessible medical equipment and difficult paths of travel were remodeled, this time with local disability advocacy groups providing recommendations to the clinics.

Other barriers that were addressed included adding accessible parking spots and patient drop-off areas, offering valet parking and shuttles, and improving signage.  And because participants made it known that there was no bus service on the primary road where most of the medical centers were located—a major barrier indeed considering the significance of an accessible transportation route to medical care—the city reinstated the bus route to serve those areas.  A disability advocate was also appointed to the City's Commission on Transit.

The considerable amount of outreach, education, and training to address attitudes and communication also had an effect on improving interactions between patients and providers. The local hospital incorporated disability sensitivity and awareness trainings for their new employee orientation programs. Local advocacy groups also coordinated with patient advocates to help them navigate the medical system more effectively.

Realizing a Community’s Potential for Progress

Although regional disability advocates like Weaver and Dineen jump-started the initiative, the broad and lasting goals would not have been realized without the dedicated involvement of community members throughout the CEI process.

"Most of the hard work," Dineen said, "was accomplished by members of the community and Umbarger, which is the way it was supposed to work."

“The best people to make change in their community,” Dineen said, “are those who live there and already have some power and influence” adding that his involvement throughout the process confirmed that “people care deeply about members of their community and are willing to try to help make improvements.”