In the heart of Nashville’s thriving arts scene lies the Frist Center for the Visual Arts, whose guiding vision is to “inspire people through art to look at their world in new ways.”  Realizing this vision meant that designers and staff needed to imagine and plan the Center in new ways so it would be a welcoming, inclusive, and accessible space for all. 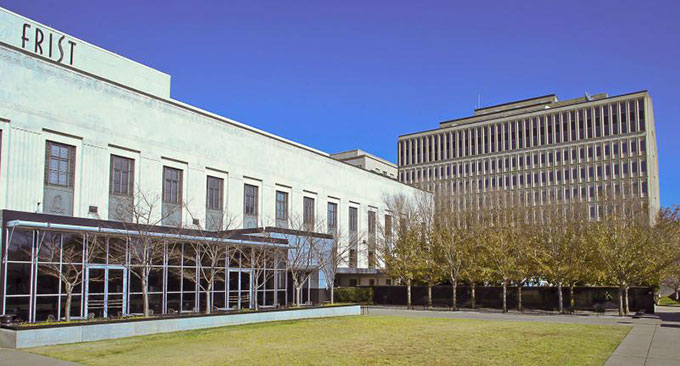 When the founders of the Frist Foundation, one of Tennessee’s larger philanthropic organizations, first envisioned the new Visual Arts Center that would open in 2001, they hoped to develop a world-class venue for the arts, as well as a collaborative undertaking bringing in the entire community. The founders exerted great effort to ensure the new Center be available to “all,” a vision that guided planning and design from the beginning.

The Southeast ADA Center became involved in the process of ensuring accessibility in September 2000 when the Frist Center for the Visual Arts contacted the Tennessee Disability Coalition (TDC) to help them make the new Center accessible to people with disabilities.  A Center staff member was the mother of a child with autism and through her work with the Autism Society, she had become connected with the TDC’s ADA outreach and education.  The Tennessee Disability Coalition is one of the Southeast ADA Center’s eight State ADA Affiliates.  Each State Affiliate receives extensive and ongoing training, information and technical assistance from the Southeast ADA Center so that all of the State Affiliates are fully competent and prepared to provide on-site ADA information, training and technical assistance.

Serving People of All Abilities

When a Frist staff member called the TDC in September 2000, Donna DeStefano, the Southeast ADA Center’s State Administrator for Tennessee, answered the phone. Because the museum was committed to serving people of all abilities by its April 2001 opening...and beyond, the museum asked DeStefano to train museum staff and volunteers on how to meet the access needs of visitors with a variety of disabilities.

DeStefano quickly assembled a team that included two other disability advocates, Floyd Stewart of the Center for Independent Living of Middle Tennessee and AmeriCorps VISTA Volunteer Sofia Maneschi.  The three advocates designed a training that was itself fully inclusive. In addition to the Center for Independent Living of Middle Tennessee, the Tennessee Disability Coalition invited individuals with disabilities and other disability advocacy groups including The League of Deaf and Hard of Hearing (now Bridges), Easter Seals, and the Tennessee Council on Developmental Disabilities to be part of the training to educate the staff and volunteers of the Frist Center about how to accommodate people with a range of disabilities.

In working with the Tennessee Disability Coalition to develop the training, the Frist Center realized that, as a museum, it was vital to look beyond physical accessibility, that it needed to ensure that its programs and exhibitions were accessible as well.  And the training the three advocates put together met that need.  It fused a combination of an overview of the ADA, physical accommodations, program accommodations to allow greater inclusion and participation, and aids to help effective communication such as interpreters, alternate formats and Braille.

"Focus ON THE PERSON," reads one bullet in DeStefano’s training, stating that the best practice overall was to facilitate an environment where a person would feel respected and welcome to ask and discuss accommodations he/she may need.  Other aspects of the training included tips from The Ten Commandments of Communicating with People with Disabilities on how best to interact with people with disabilities, from approaching service animals (“never distract the animal”), to communicating with folks with hearing impairments (“Look directly and speak clearly. Never shout. Speak in a normal tone of voice.”) (A PDF version of the Commandments is available here: http://www.disabilitytraining.com/pdf/tcd-wv.pdf).  The training materials included an outline of the presentation, presenter contact information, and the Coalition’s Talking About Disability and Disability Etiquette brochures as well as fact sheets and resources from the Southeast ADA Center and National ADA Network. These materials became Section 6 of the Frist Center’s Volunteer Training Manual.

Active participation of disability advocates early on in the planning and design process coupled with the Frist Center’s ongoing commitment to full accessibility has created an attraction that serves the widest audience possible.  The trust and collaboration between the Frist Center and the Tennessee Disability Center as a local point of contact for information and technical assistance about the ADA has grown and developed through the years.  As a result, the Frist Center has been able to take small steps that have yielded great results over time.

Accessibility Guided by Partnerships and Colloboration 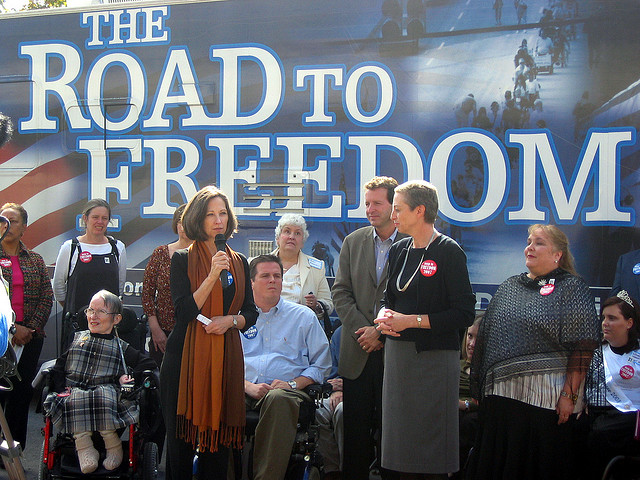 As the result of its early collaboration with the Southeast ADA Center’s Tennessee State Affiliate, the Frist Center has become a shining example of how to create a space that is accessible to all.

“We would not be the institution we are without the incredible relationship we have with the Tennessee Disability Coalition and Donna DeStefano who, with TDC and CIL staff members and advocates, have been real partners on this tremendously worthwhile journey,” said Ellen Pryor, Director of Communications for the Frist Center. “

“That means accessibility,” Henderson continued, “It’s a word that is heard often at the Center.”